As I told you last time, my present for my adorable kitten for his 6 months anniversary was taking him to have his… Fix. Sorry Alfie! I have to admit I was a bit anxious about it, but actually, it wasn’t THAT bad.

The day started very well, I managed to lure him into the cat carrier pretty easily (after so many failed attempts in the past, I’ve finally found the perfect technique – to be revelaled in a future post).

We  were the first ones at the vet clinic . In blissful denial to the day’s event, Alfie rolled around on the floor, showing off to his young-and-pretty-hot-lady-vet. Seize the moment my friend, you won’t be able to appreciate female beauty any more in a few hours. 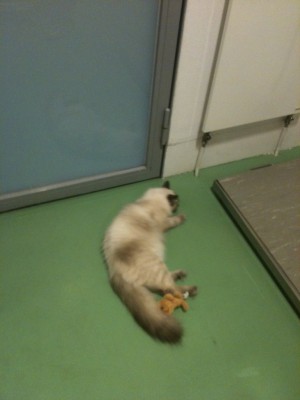 I called the clinic after 3h and they told me everything went fine and he was already awake! He’s my hero! When I picked him up in the late afternoon, the lady told me the staff fell in love with him. (Of course, I mean, just look at him!) Normally, they advise owners not to feed pets after neutering and to get an Elizabethan collar. But since he recovered so fast, he was allowed eat and didn’t need a collar. I kind of blame his super duper premium tuna & his water fountain for giving him these super-kitten powers.

Alfie wasn’t bothered at all by the operation and was up and running as soon as he got home. However, he did feel slightly embrassed about the new situation… 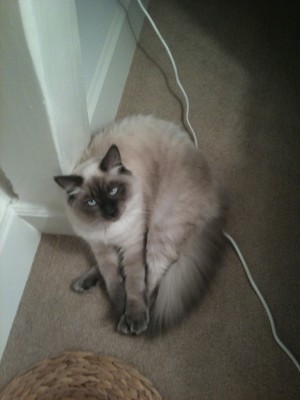 So what else could I have done to try to fix the fix but to get Alfie some new balls?

Two days after, he’s still crazy but they say it takes 6-8 weeks for the hormones to subside, so I’ll enjoy it while it lasts. But boy, I’ll enjoy it even more when this hectic running around like a lunatic period ends and he goes into a more mature, more affectionate and more zen period of his life.

I semi-hate it when people celebrate every single month in the first year of their baby’s life or of their relationship. But hey, ho, if you can’t beat them, join them! So, as a present for Alfie’s 6 months anniversary, I will offer him… you know… let’s just call it… The Fix.

Appointment at the vet… DONE!

No food after 6pm… DONE! (in solidarity with him, I didn’t have any dinner myself)

Acting like nothing special is going to happen tomorrow… DONE!

So I guess we’re all set. I just hope I will manage to get him in the cat carrier easily. I’m not kidding! Last time it took 3 girls, 30 minutes and 50 different strategies to put him in that carrier. (I guess he just didn’t want to leave my friend’s place) I’ve left the cat carrier open today and managed to lure him in with toys. It seems to work, but fingers crossed for tomorrow (I’m not the most patient person in the morning).

Come back to see how it went.